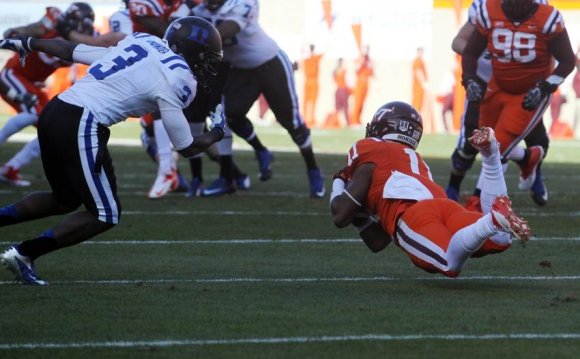 Frank Beamer started his tenure as Virginia Tech's head mentor in 1987. That 12 months Tech re-introduced the stripes the very first time since 1970 and removed the celebrity merit decals regarding the front side. The white VT and facemask remained the same.

Tech played against Nebraska in Orange Bowl and added the game logo on the straight back.

The big NCAA soccer logo design is included regarding back and the white stripes tend to be reduced on both edges.

Tech makes the first radical change to the helmet under Frank Beamer using removal of the stripes and switching the facemask to maroon. An "EF" memorial decal is included with the back.

Just a tremendously minor modification is produced with the United states Flag decal, that will be now outlined in white.

The NCAA somewhat changed their logo design towards the NCAA font used these days.

Virginia Tech joined up with the ACC in 2004 and swapped to a conference-specific decal from the straight back. A yellow ribbon decal normally added.

A Bowl Championship Series decal is added the glucose Bowl against Auburn.

The yellowish ribbon and American Flag decals tend to be swapped regarding the back associated with the helmet. A difference is produced with the VT decals between your V and T at the bottom.

The American Flag is relocated to its initial location and a VT logo design is included with the back honoring the Corps of Cadets.

The Corps of Cadets decal is removed.

A Bowl Championship Series decal is added when it comes to Orange Bowl against Kansas.

A "JD" memorial decal is added.

The initial throwback helmet is introduced. The helmet was worn from 1971 to 1973 and features a good white shell and grey facemask with an orange condition of Virginia and maroon "TECH" letters. It had been worn with a throwback uniform aswell.

A Bowl Championship Series decal is included for Orange Bowl against Cincinnati.

No changes are designed last year from 2008 regarding the standard maroon helmet.

The 2nd throwback helmet is introduced. The helmet ended up being worn by Frank Beamer inside the playing times and features the classic "television" logo and gray facemask. It marks the first time Tech has actually worn stripes regarding the helmet since 1997.

Nike introduces an one-off consistent program in 2009 featuring 10 spotlight football programs. The all-white uniform functions a white helmet with a maroon VT logo design and non-symmetrical stripes that taper off to a couple of white triangles. The consistent had been so well-known that it was worn once more a couple of weeks later at UVA.

Nike goes on the one off consistent system this season featuring 10 spotlight football programs. The all-black uniform features a matte black helmet with an orange VT logo and a distinctive wedge stripe that separated nearby the front regarding the helmet. The stripe in addition features a circuit board structure in straight back. The Corps of Cadets guard is added to the trunk and Virginia Tech motto: Ut Prosim (That I May provide) is added to the throat bumper.

The rise in popularity of the white 2009 Nike Pro Combat helmet contributes to another white design with no stripes in 2010.

Stripes are put into the white helmet from previous in the season, but just halfway down the straight back. a crown decal with a "9" is included as an objective for team to win its ninth-straight online game and a division championship.

The orange top logo design is included with "COASTAL" inside to symbolize winning the Atlantic Coast meeting's Coastal Division.

The white helmet returns for the ACC Championship against Florida State. A "212°" decal is added to the trunk. Throughout the season staff chaplain Johnny Shelton told the team an account about water going from cool to boiling at 212 levels. He told the group they started the year "moderately cool" but because of the ACC championship online game, these were "boiling over" for a title.

For the first time at school history, an orange helmet is worn. Playing in Orange Bowl, the helmet features a maroon VT logo design and stripes just like the white helmet. In addition it features the BCS logo and an alternative "212°" decal. This helmet additionally marks the first occasion an all-maroon chinstrap is worn by Tech.

The next throwback helmet is introduced. The helmet had been worn from 1974-1977 and features a favorite "TV" logo and white facemask.

The orange helmet returns for one online game in 2011 with inverted stripes from Orange Bowl design. The team will pay tribute to the 75 victims of the 1970 Marshall jet crash, including Virginia Tech students Frank Loria and Rick Tolley have been coaches for the Thundering Herd, by putting on a special sticker on the rear of the helmets. The round stickers have the initials RT and FL for the two previous Tech people involved, along with a 75 when it comes to few sufferers associated with the crash.

Stripes are put into the conventional maroon helmets for the first time since 1997. The stripes act like the ones used regarding earlier white helmets.

Minor changes are created to the typical maroon helmet including a brand new die-cut VT decal and maroon chinstrap. The NCAA decal tends to make a return for the first time since 2003.

This Week in College Football History - Ga. Tech vs. Virginia